You gotta re-read these. First couple were good, then they got progressively odder. Herbert used some Arabic derived words for his Dune vocab, if I remember correctly. It's been a few years.

I'll put them on my summer reading list. I vaguely recall enjoying the first book.

Shanazel said:
I'll put them on my summer reading list. I vaguely recall enjoying the first book.
Click to expand...

You could take the short cut and watch the movie. I think there were two made of the first book. No belly dance scenes that I can recall.

Sorry for getting a little off topic everybody!
Last edited: Feb 14, 2010

Ariadne said:
I don't think it was her body type da Sage, I think it was the total lack of grace. I have seen some videos of woman her size bellydancing that left me absolutely stunned at their skill. This just was not one of them.
Click to expand...

It wasn't just the total lack of grace on the dancer's part for me. I was put-off before the dancer even started performing. The woman who introduced her wore an ill-fitting "bellydance" costume, and clomped around on the stage pretty gracelessly, herself. I couldn't take the dancer seriously for the poor image the announcer presented (to myself, at least).

I'm not trying to be mean-spirited or overly-critical. However, first impressions are important. That first impression left on me by the announcer seemed to say to me that this was a group that didn't know a thing about bellydance. It seemed kind of thrown together to me. Kind of reminded me of a few school assemblies from back when I was in high school. Then when the dancer's crotch pointed straight at the audience, I was done at that point. -_-

Call me weird, call me funny, call me a prude, call me whatever---I just could not take this performance, or this group, seriously. To me, it wasn't bellydance, it wasn't fusion, and although the dancer's physical strength did impress me, it was just tasteless.
Last edited: Feb 14, 2010

Kira_Majeric said:
I think I found her again.

Okay, I stuck around long enough on this one to watch the first performance.

Is it safe to say that if one has to make adjustments before almost every single transition, then one just isn't ready for the stage? :think:

Exactly and what's wrong with just being so.....

Zumarrad said:
It's... really... bad. OK, she is physically strong and that routine at the beginning, apart from the boob explosion, would make you pretty fit if you did it every day.That's what it looks like, a moving meditation. It is mostly quite good. I'm just going to draw a veil over the "veil" and the "belly dance" at the end.

What strikes me here though is the problem of stage craft and context. Look at how she was introduced and how she came on. BLAH. You can't do pofaced experimental meaningful dance coming on like that! Secondly, it looked to be midafternoon maybe at a festival, and people were talking all the way through. The music was far too quiet, there was no lighting... it was a theatre piece (albeit a quite poor theatre piece) plonked in the middle of a fair and it did not work for this reason alone.

If she'd been on a stage with decent lighting and the music cranked up very loud, and an audience in the dark feeling required to whisper at most, it would not have been good but it would have been a great deal better.
Click to expand...

Thanks for the observations.. I agree with you as they apply to all performance situations.

I think performers and teachers really have to start thinking about the context of their work.
OK, perform where you like, but will it work? how will it work? what are you communicating to your audience? do you care?

'the boob explosion' was probably the most watchable part of that clip for me...it was the part I personally found the most entertaining.
I was not aware there was any music and the rest didnt say anything to me.

I am still not clear of the boundaries of fusion work and how it fits under the umberella of ME dance? this seems to be one question nobody really want to address.

I thought this in particular was an interesting clip to highlight, because it is making waves in the Tribal and fusion circles.

At the end of the day, this artist chose to display this performance as an example of her work on youtube. I assume when someone does this they want people to look at it, discuss it, react, think? why else would you put it out there?:think:

The clip has certainly provided her with more 'coverage', at least.
Last edited: Feb 14, 2010

upon consideration and on rteading some of the statements by the dancer - I think that she may have personality issues. Is she still fair game for comment 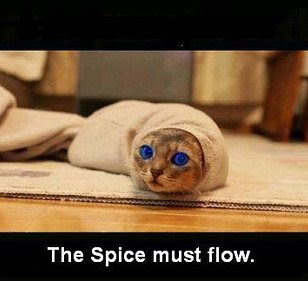 As my Significant Geek Other blurted out (while howling with laughter) "Spice kitty must fold space and time!" :lol:

IMHO, this cat has done just as much "bellydance" fusion as the dancer in the clip. It is veiled, it is on it's belly, an it appeals to a specific subculture (Fans of Frank Herbert, Cats, and [in this setting] bellydance).

I think one key issue here is that it is great that we are all well rounded individuals (NO pun intended, folks!) who have interests in addition to dance. Those divergent interests can coexist happily within us, but when we let them out in the light of day, others have every right to wrinkle their noses. It's like a venn diagram, the more things you try to intersect, the smaller the population that will "get it."

As to your point Jennc, she is not open to comments. And that very thing is also going to limit her acceptance among the doubtful, while making her followers more rabidly loyal.

In case you are not familiar with Venn Diagrams, the place where the circles overlap is the area of commonality. like such:

Anala said:
In case you are not familiar with Venn Diagrams, the place where the circles overlap is the area of commonality. like such:
Click to expand...

It is art, me dear -- whatever you see is whatever it is!

So what is art? and more importantly... what is Tribal fusion, Herbert someone bene big worms art? and what does this have to do with Middle Eastern art???

It's like looking at a Dali, if it actually makes sense to you, nobody wants to actually TALK with you about it, because then you'd be nuts!
K

Jane said:
You could take the short cut and watch the movie. I think there were two made of the first book. No belly dance scenes that I can recall.

Sorry for getting a little off topic everybody!
Click to expand...

for anyone in hte UK, the movie is on today at 2ish on 5USA.
K

Anala said:
In case you are not familiar with Venn Diagrams, the place where the circles overlap is the area of commonality. like such:
Click to expand...

jenc said:
upon consideration and on rteading some of the statements by the dancer - I think that she may have personality issues. Is she still fair game for comment
Click to expand...

I've suspected that from the start. I'm just surprised no one else has picked up on it until now.

Caroline_afifi said:
But I am not allowed to say I see sh*%! :lol:

So what is art? and more importantly... what is Tribal fusion, Herbert someone bene big worms art? and what does this have to do with Middle Eastern art???

well as in the uk we have freedom of speach then yes if it appears shit to you then you can say its shite, and your in the majority on this, not often we agree must be a red letter day :lol:
not sure that her personality is rellevant, her act was awful on so many levels and thats what we're disscussing, i love love tribal fusion but this rotest:
You must log in or register to reply here.
Share:
Facebook Twitter Reddit Pinterest Tumblr WhatsApp Email Link
Top